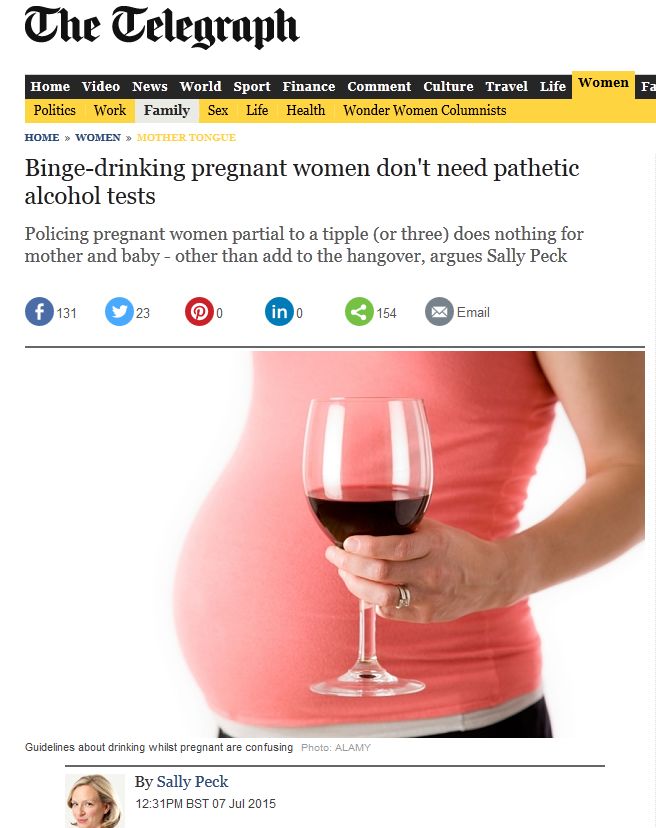 Recent research from the UK is sparking discussion about whether routinely testing pregnant women for alcohol use would be helpful.

While the researchers are insisting that binge drinking is ‘prevalent and socially pervasive’ and stronger measures are required, others argue that biological testing is a form of policing women and one that is counteractive in long-run

Sally Peck in her article in The Telegraph says:

“But here’s why we shouldn’t test pregnant women on their alcohol consumption: policing rather than supporting pregnant women fails to prepare them for motherhood.

Instead of imposing prison-style booze tests, let’s talk more about how to help women and men navigate the early years of parenthood, and how to get help when they need it. And let’s make sure that the help we promise – or say that they should have – is actually available to them.”

Research has shown that testing women for alcohol and drug use during pregnancy fails to support women and their babies in the long-run. Women with substance misuse concerns are less likely to seek help from health care providers and avoid prenatal care. And while women in all socio-economic brackets use substances, certain groups of women are unfairly targeted and subject to more invasion of their privacy and are likely to experience adverse outcomes from testing (e.g., child protection reports, custody hearings). As well, routine testing raises ethical issues around consent (e.g., what happens if a mother says she doesn’t want to be tested? Should a health care provider do the test anyway?), women’s autonomy and self-determination, and patient-doctor confidentiality.

Read early posts on the politics and ethics of testing pregnant women for alcohol use:

One thought on “Policing or Supportive? Why We Shouldn’t Test Pregnant Women for Alcohol Use”