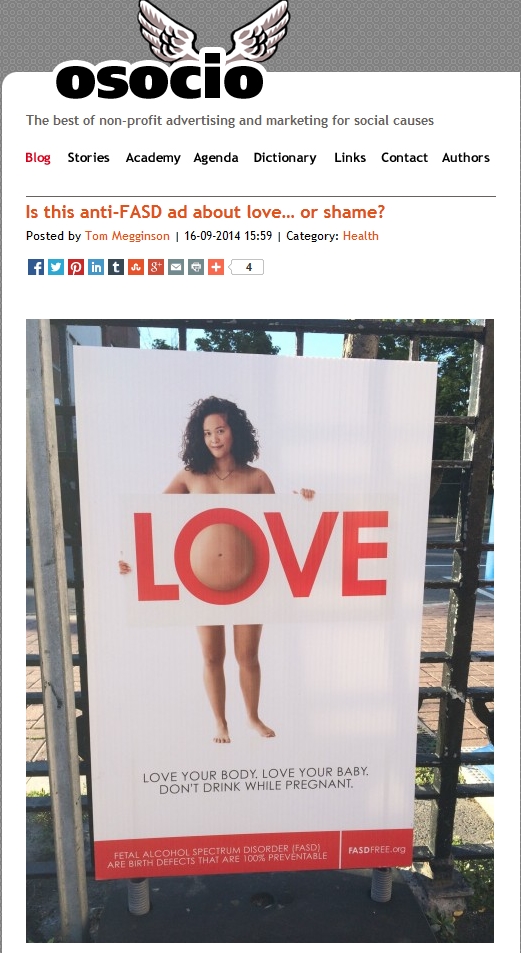 This awareness campaign in Ontario has been getting a fair amount of attention in the past few weeks. (See the CBC coverage: LCBO joins campaign against Fetal Alcohol Syndrome, August 25, 2014)

The campaign was developed by FASWorld in Toronto, a non-profit organization co-founded by adoptive parents, Brian Philcox and Bonnie Buxton. Earlier this year, posters from the campaign could be seen around Toronto.

This September, FASWorld teamed up with the Liquor Control Board of Ontario (LCBO) to spread the campaign across all 640 LCBO outlets in Ontario.

While many people find the images to be positive, others have critiqued the campaign as it suggests that women who do not stop drinking during pregnancy are uncaring and irresponsible. Others have found the focus on the fetus/pregnant belly and the use of naked women to promote awareness as problematic.

Global News reports on mother, Laura Jamer, who lodged a complaint with the LCBO.  Jamer critiques the campaign in light of inconclusive research on “light” drinking.

Jamer is quoted as saying that the campaign is unlikely to be effective for women with serious alcohol misuse concerns and may make other women feel guilty or scrutinized: “This marketing campaign is probably not going to target people with the propensity to drink heavily while they’re pregnant. Those people have bigger issues going on in their lives where a light guilt-ridden campaign is not going to make a difference to their drinking.” (See the coverage: LCBO ad urging pregnant women to avoid alcohol spurs formal complaint, September 16, 2014)

Tom Megginson on the Osocio blog also takes a closer look at the campaign. He comments: