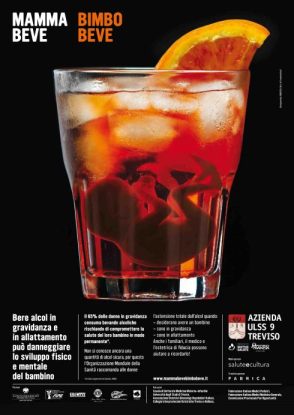 As many of you know, there is little evidence that campaigns to increase awareness of the harms of prenatal alcohol exposure have an impact on rates of alcohol use during pregnancy and/or FASD. (If you don’t know this, I hope you find it surprising, because governments and non-profit organizations spend a lot of time and money on these campaigns and the liquor industry loves supporting them as they get credit for being socially responsible).

We also know very little about the impact of different types of warning messages. That’s why it was nice to see a paper evaluating the Italian ‘Mummy Drinks, Baby Drinks’ campaign which has received a fair amount of attention in the past for its graphic image intended to provoke shock or fear into viewers.

In May 2010, the Italian Local Health Authority of Treviso (Veneto Region) launched the  ‘Mamma Beve Bimbo Beve’ (‘Mummy Drinks Baby Drinks’) campaign. The campaign was targeted to women of child-bearing age (aged 20–45) and their families in the local health unit area of about 400,000 people. The messages of the campaign were:

The campaign included banners on the street, buses, at the entrance of two local hospitals, and four local health units. Posters and leaflets were available in various health care units and physician offices and in restaurants and bars. There also was a fair amount of Internet and mass media attention partly due to debate about the image used.

The evaluation focused on assessing the impact of the image on the target population one year after the launch of the campaign. The researchers interviewed 690 parents or caregivers who accompanied their children (ages 0-2) to a vaccination clinic at their local health unit.

Overall, 84% of the respondents said that they remembered the image. Almost all (93%) recalled the warning message and 53% recalled the health behaviours suggested by the campaign (i.e., do not drink during pregnancy). The image was noticed mostly in health care services, especially in hospitals, and about one-fifth saw it on television and in newspapers 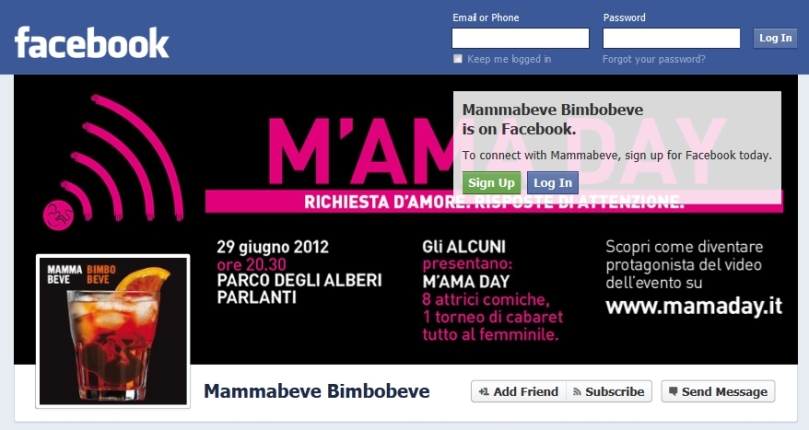 Overall, the study supports previous research that shows communication campaigns can increase awareness of the dangers of alcohol use during pregnancy.

The next “edition” of the Treviso campaign will be launched on September 9, 2012 (International FASD Awareness Day). Check out the website here and the YouTube video below.

For more on this campaign, see previous posts:

Bazzo, S., Battistella, G., Riscica, P., Moino, G., Marini, F., Geromel, M., and Czerwinsky, L. (2012). Evaluation of the Impact of the Image Used in a Communication Campaign to Raise Awareness about the Effects of Alcohol Use During Pregnancy. Alcohol and Alcoholism, doi:10.1093/alcalc/ags051.