“I don’t drink to my baby’s health”

According to PARPA (the State Agency for the Prevention of Alcohol-Related Problems), nearly 80% of women in Poland drink alcohol. While women continue to drink less on average than men, the frequency and quantity of alcohol consumed by women is increasing. Women who tend to drink at riskier levels tend to be 18-29 years old, unmarried, and living in cities.

In a national survey of alcohol and substance use during pregnancy in 2009:

One of PARPA’s initiatives to address FASD has been the development of a “Pregnancy without Alcohol” campaign that began in 2007. Sponsored by the Ministry of Health, the Polish Gynecologist Association, and the WHO Bureau in Warsaw, the media portion of the campaign targeted pregnant women and the general population from 2007-2008. The campaign was supported by more than 600 community governments. Over 250,000 educational materials were distributed, including leaflets, brochures, posters and films.

Another aspect of the campaign included activities in honor of FASD Awareness Day on September 9th – view some of these activities here.

You can take a look at the campaign website here.

A Better Start for Your Child

Since 2008, the Polish Spirits Industry has supported a campaign called “Better start for your child” (“Lepszy start dla Twojego dziecka”). The campaign includes brochures for health care providers, brochures for pregnant women (handed out by physicians and midwives), posters, ads in magazines and on radio and TV. 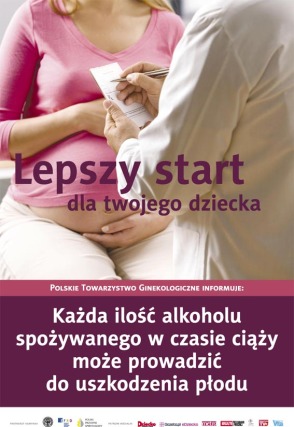 Górski, K.  Prevention of FASD in Poland. The State Agency for Prevention of Alcohol Related Problems. Family and Youth Department.

Wojnar, M. et al. (2010). Alcohol use during pregnancy – results from the Polish National Survey 2009. Presentation at the Sixth World Conference on the Promotion of Mental Health and Prevention of Mental and Behavioral Disorders, November 17-19, 2010, Washington, DC. View the powerpoint presentation here.