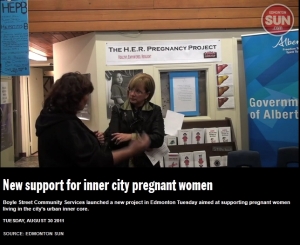 The agency runs the Streetworks program which is based on the principles of harm reduction, health promotion, and primary health care. The new funding will be used to support pregnant women who are dealing with issues such as addictions, poverty, and family violence and to support them in addressing these issues and ultimately support healthy births.

Marliss Taylor, Streetworks Project Manager, says in the Alberta government press release:“Women who are street-involved and pregnant face multiple barriers in staying healthy throughout their pregnancy. Often survival issues have a higher priority than pregnancy issues for this group of women. This can lead to negative judgments by people who don’t understand the struggles they face. This program will work with women where they are at, in a harm reduction context, building upon their strengths and enabling moms to meet their full potential. It has a large outreach component and will work with other agencies that provide services to this population.”

The Edmonton Sun also has a video clip of an interview with Marissa Nakooche, one of the program staff.